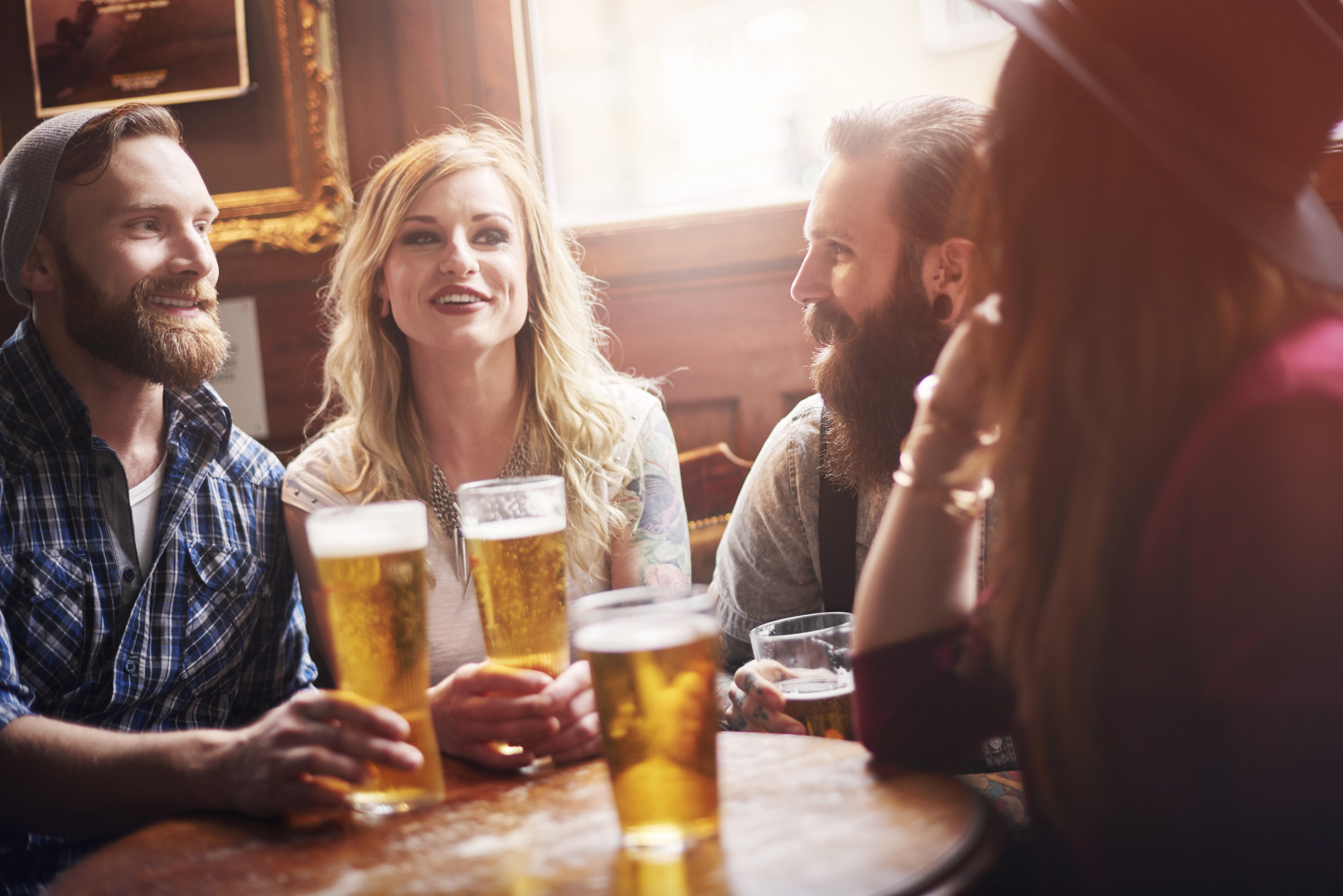 “He was a wise man who invented beer.” – Plato

Every year on April 7th, America celebrates one of the greatest alcoholic beverages known to man – beer. Beer is the most widely consumed alcoholic beverage in the world and the third most popular drink overall, following tea and water. Here in the United States, it’s no secret we love our beer. In fact, our country consumes 6.25 billion gallons of beer each year. That’s enough to fill more than 9,500 Olympic-sized swimming pools.

Considering we’re the West End Historic District, it’s only appropriate that we serve you a little background on beer and this exciting holiday.

The History of Beer and National Beer Day 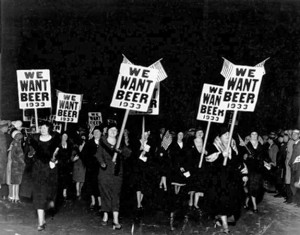 The origins of beer date all the way back to 9500 BC when cereal was first farmed. In fact, the written history of both ancient Iraq and ancient Egypt reference the beverage. Since then, brewers around the world have creatively re-imagined beer, resulting in dozens and dozens of different styles.

Here in the United States, beer has quite a complicated history. In 1919, the Eighteenth Amendment to the United States Constitution was enacted into law, prohibiting the production, sale, and transportation of alcoholic beverages. This marked the beginning of the Prohibition Era. More than a decade later, President Franklin D. Roosevelt signed the Cullen-Harrison Act, which was the first step toward ending Prohibition. On April 7, 1933, beer enthusiasts could brew, sell, and buy beer legally for the first time in 13 years. National Beer Day falls on April 7th each year to celebrate this glorious day in history.

Enjoying a Beer in Downtown Dallas

Now that we’ve gone through the basic history of the holiday, here are 5 places in the Dallas West End where you can grab a cold one. In President Roosevelt’s words, “I think this would be a good time for a beer.” 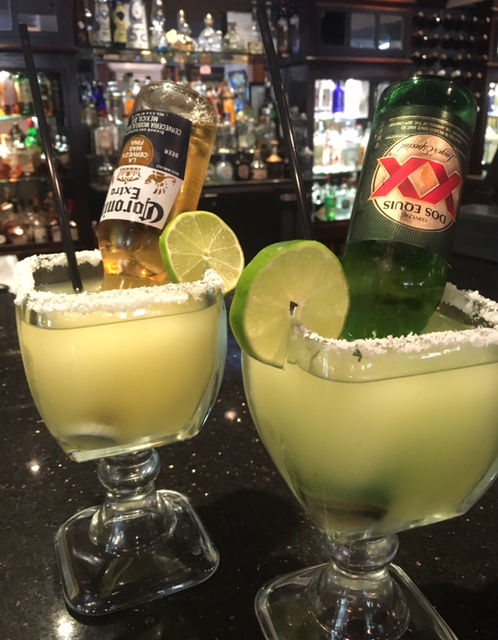 An authentic Mexican lunch or dinner would not be complete without an equally authentic drink menu, and RJ Mexican Cuisine does not disappoint. Two of their most popular mixed drinks, the Coronarita and Dos XXrita, are creatively and deliciously concocted with two well-known Mexican beers. In addition, RJ offers other Mexican beers like Tecate, Pacifico, Bohemia, Carta Blanca, Sol, Montejo, Negra Modelo, and Modelo Especial. So whether you order a Steak Chile Relleno, Banana Leaf Pork Tamales, or Chicken Tinga Chimichangas, you’ll have a wide offering of beers to wash it all down with. 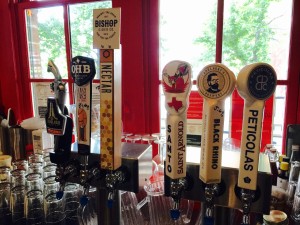 The newest addition our district, Tutta’s Pizza combines gourmet smoked meat pizza, live music, a vibrant atmosphere, and – you guessed it – a great selection of beers. Tutta’s offers craft beers on tap and by the bottle or can. Some drafts include Deep Ellum Dallas Blonde, Revolver Blood and Honey, Oak Highlands Freaky Deaky, Community Witbier, Karback Weekend Warrior, and Adelbert’s Black Rhino. They also offer Grapevine Craft Brewery by the bottle or can, Four Corners, and more. Their made-from-scratch dough, Dallas pride, and fun vibe makes Tutta’s Pizza the perfect place to grab a drink with friends. 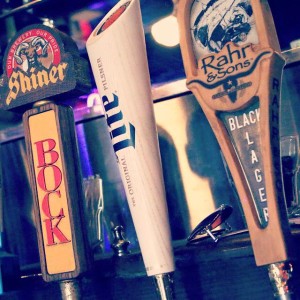 Family owned and operated since 1978, Hoffbrau Steaks is a Texas Hill Country Steakhouse serving aged USDA choice steaks and homemade recipes from scratch with love. Their casual and rustic décor, unique country comfort, and true Texas flair attracts both tourists and local guests. Hoffbrau Steaks offers a variety of drafts and bottled beer, including Panther Island- Real Good, Rabbit Hole – Mike Modano’s 561, Rahr – Ugly Pug, Fat Tire, Real Ale Fireman’s #4, and Ziegenbock. Throughout the month of April, customers can enjoy $3 small drafts and $6 beer buckets during Happy Hoffbrau Hour every Monday – Friday from 3:46 to 7:00 pm. No matter what type of beer you choose, nothing pairs better than a bucket of their Candied Bacon. 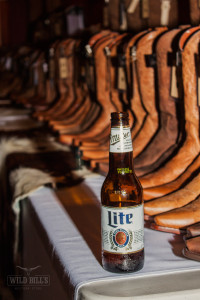 For over 40 years, Wild Bill’s Western Store has shared the friendly southern hospitality that Texans and cowboys are known for. One of the many ways they deliver this hospitality is through a warm welcome with an ice cold beer. That’s right – you can enjoy a bottle of beer while you shop. Wild Bill’s is truly a one-stop shop for souvenirs and western wear, including everything from cowboy boots to hats, clothing, belts, buckles, handmade jewelry, and gifts. The free beer is icing on the cake. 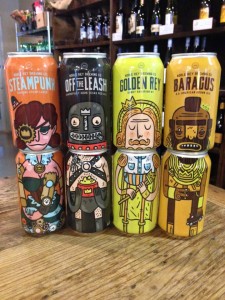 If you’re having a party, looking for a gift, or just restocking your inventory at home, 1001 Wine & Spirits has everything you need. They have a huge selection of liquor, wine, cigars, gifts, and beer. As a small Dallas business, 1001 Wine & Spirits prides itself on supporting other Dallas and Texas local beers. Store favorites include craft beers and ciders from Deep Ellum Brewery, Noble Rey Brewery, Community Beer Company, and Martin House Brewing. To encourage you to try new things, 1001 Wine & Spirits allows customers to “Build Your Own 6 Pack” by mixing and matching different types of beer. 6 different beers in one pack? Sounds like a no-brainer to us.

As much as we love National Beer Day, we think America’s favorite beverage should be celebrated year-round – and the Dallas West End is the place to do it. Cheers!