An Interesting Look Back At Dallas And The West End

Ask anyone in Dallas what makes this city great and you will not receive the same answer twice – from historical landmarks to Texas-original food to the bustling and growing arts community, each Dallasite and Texan has their definition. Now, ask anyone in Dallas the history of the historic West End district, and you might run into some overlap.

While it’s true the district once held a bustling mall and shopping center, and that The Sixth Floor Depository is a recent historical landmark in United States history, not much else is known from the early days. Downtown Dallas has prospered and expanded well beyond anyones expectations, and so has our district! We love this district just as much as Texans love sweet tea and barbecue, so use these interesting facts next time someone asks you what makes downtown Dallas and the West End so great!

First, we have to talk about a legend of Dallas – John Neely Bryan. Bryan visited the Dallas area in 1839 from Fayetteville, Tennessee, to look for a place to create a trading post. The area that would become the West End originally consisted simply of Bryans’ trading post. In July 1872, the Houston & Texas Central Railroad arrived in downtown Dallas, attracting manufacturing companies whose warehouses would come to define the architecture style of the West End. Have you ever wondered why the Dallas West End has an old-fashioned look to it? Thank Bryan and the businesses that followed to create the unique look within Dallas!

The West End Gets Weird In The Wild, Wild West

After the establishment of the city, things looked pretty great – big businesses were coming, commercial and trade activity were bustling, the city was on it’s way to becoming a transportation hub. Dallas had everything going for itself at the turn of the 20th century…until the frogs came.

In 1910, the city of Dallas had a severe frog epidemic, earning the name “Frog Town.” The area was prone to flooding from the Trinity River, and with no infrastructure yet in place, the population of frogs skyrocketed. The TCU Horned Frog has nothing to do with the epidemic, but it’s interesting to think it might! 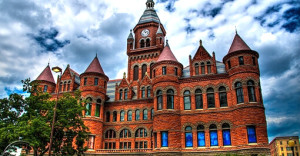 Between World War II and 1970, the city population TRIPLED, going from roughly 295,000 to 845,000 residents. What was once a town for trade, businesses and entrepreneurs was quickly on it’s way as one of the United States most populous cities! The city eliminated the frogs, but suffered sporadic water shortages until the 1950’s – but new reservoirs remedied the problem and the surrounding areas now serve as recreation areas.

The Revitalization And Historic Preservation Of The West End

One of the more statement, “I can’t believe I was there for that!” events to happen in Dallas history was the opening of Planet Hollywood in 1991 at the West End Marketplace, where Bruce Willis and other celebrities poured in for the grand opening. Van Halen headlined the grand opening, and best of all? It was completely free and open to the public.

From early beginnings to modern architecture, the historic West End district has stood the test of time. Downtown Dallas has seen it all, has been through it all, and continues to be a place on the map that hosts thousands of visitors and Texans looking to learn more about what it is we have to offer. It all started here, and it continues here in the West End!